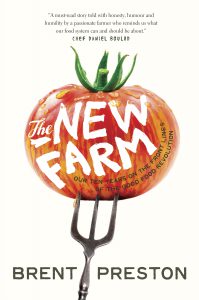 The inspiring and sometimes hilarious story of a family who quit the rat race and left the city to live out their ideals on an organic farm, and ended up building a model for a new kind of agriculture.

Or at least you would be mostly wrong. Because Brent Preston and Gillian Flies did move to the country, and they did make a lot of stupid mistakes, some of which are pretty hilarious in hindsight. But their goal from the beginning was to build a real farm, one that would sustain their family, heal their environment, and nourish their community. It was a goal that took a decade of grinding toil to achieve.

Told with humour and heart in Preston’s unflinchingly honest voice, The New Farm is the story of one family’s transition from die-hard urbanites to bonafide farmers and passionate advocates for a more just and sustainable food system. It’s the story of how a couple of young professionals learned not just how to grow food, but how to succeed at the business of farming. And it’s the story of a small, sustainable, organic farm that ended up providing not just a livelihood, but a happy, meaningful and fulfilling way of life.